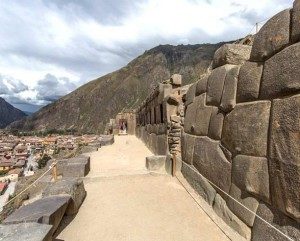 Blocks cut out of stone, perfectly adhere to each other. In the joints between two blocks do not pass even an ordinary sheet of paper or a credit card.

For binding the data blocks not used for the solution. Blocks attached by a snug fit and a three-dimensional structure of masonry.

In the video above, perfectly describes possible ways of working stone, but the actual acting method, which was used by the builders, no one knows.

This is due to the fact that the way to cut granite blocks directly from the rock and to Polish them and in modern technology.

Strikes and the high precision with which the blocks were made. Not only that, all of them are best fitted to each other, and have clear, straight edges.

In masonry blocks found rough and well polished. Unusual is that the last slightly protrude above the mass, although if they were worn in a natural way, it ought to be Vice versa.

This gave researchers the idea that previously, all the walls were sanded and covered with inscriptions. It is possible that during the destruction of writing, someone deliberately practiced capturing images with blocks. And it turned out that the stones without inscriptions preserved in its original form, and those on which was the writing kazaliste.

Among other things, to wonder and makes the antiquity of these buildings. The people behind the standard views of science could not be at a level of development that would be painless to create such complex technology in the manufacturing facilities.

And if earlier it was believed that the builders of these structures were the Incas, then looked up with a reasonable point of view and to compare the upper and lower layers of the structures can be clearly seen: the add-ins that are related to the Incas were simply an attempt to recreate and repair what was created before them.

(This is evident by the fact that ideally processed in large blocks is small clutch). This suggests that the level of the Inca Empire were not allowed to build big blocks and even more without fastening solutions and they could not even transfer the already existing blocks in case of their failure, they had to smash and collect pieces).

D t he standing architectural masterpieces are located in the base or even the foundations of new buildings. And this is another confirmation of the existence of a developed ancient civilization.

It is possible to turn this issue into theme (regular). So if you are interested, please leave a review in the comments section.