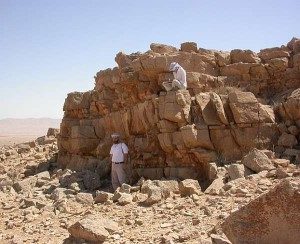 According to Mr. Mason, the stones are positioned to stand out amid the empty landscape. Nearby there is nothing that would indicate a settlement. This is unusual, because the Neolithic people, as a rule, buried the dead and performed rites right there where they lived. Perhaps, the archaeologist came across one of the earliest examples of the development of ideas about “the land of the dead” than “the land of the living”, which is characteristic of the later European Neolithic. On the other hand, it can be assumed that the settlements in these areas were seasonal, poetology habitat are not evident.

So far the only building in the area remains the monastery, built in the late IV — early V century and keeps frescoes of the XI–XII centuries. According to Mr. Mason, on the site of the monastery was originally a Roman watchtower that was partially destroyed by an earthquake and then restored. Specialist and went into the wilderness in search of a not yet studied Roman structures, but in front of an ancient stone quarry stumbled on the step structure about two meters in diameter, located on the principle of cells.

Next to them were placed a line of stones and the stone circles of about six feet in diameter, leading to the idea of graves. Nearby are the kites that were probably used in ancient times to corral wild animals. The rocks for the kites were taken from those of the stepped structures.

Similar patterns were found near Palmyra in the desert in Northern Syria, but the researchers are unable to find any related artifacts that are amenable to Dating. “In the mountains in Western Syria, has a very similar structure, but later they were joined by the graves of the bronze and iron ages and the Roman material, — says Mr. Mason. — They date to the earliest construction is not possible”.

The center of the complex — a pile of stones marking the site of the ancient quarries. Perhaps it was this landmark has attracted the attention of primitive people who considered this place special. Photo: Robert Mason