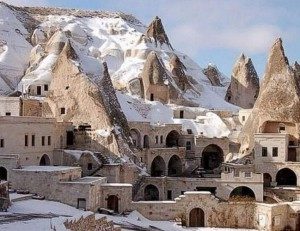 In one of the most mysterious corners of the earth – Cappadocia

750 km away from Istanbul and 450 kilometers from Antalya there is amazing land. What would you wasn’t talking about his earthly origin, nor believe.

In one of the most mysterious corners of the earth – Cappadocia

750 km away from Istanbul and 450 kilometers from Antalya there is amazing land. What would you wasn’t talking about his earthly origin, nor believe. Leafless trees, ploughed fields and asphalt roads surprisingly smooth – the only signs of human civilization.

All other scenery is real lunar plains with some Martian dwellings. Simply breathtaking, when the road suddenly takes you to a valley filled with hundreds of stone structures poplar shape with rectangular niches similar to beehives for pterodactyls. Then suddenly your eyes the mountains with giant termite mounds. Structures that are a lot of tens, then recede, exposing the lifeless lunar surface. And on the horizon – the huge snowy mountain ranges. Amazing!

So at dawn we were in Cappadocia.The dawn in this “moon country” is a special time. To enjoy them, you need to get up at half past five in the morning and climb in a hot air balloon to see the changing colors of the Cappadocian sand-pink-red mountains in the first rays of the sun…

If on the coast of Antalya on one indigenous person, five Germans and ten Russians, in Cappadocia at a Turk there are five Japanese and seven of the French. Ukrainians and Russians there, although the guides in the Russian language from local merchants meet. My subjective advice – do not attempt to recover the historical facts of such publications – each of them narrated the same story, but with many contradictory details. Cappadocia still need to watch, not to read about it in books.

The unique landscape formation began around 8 million years ago, during the eruption of volcanoes of Cappadocia. Ash, lava, rock debris and clay fell asleep and flooded the land, raising its level to 300 meters.

Millions of years turned volcanic ash into soft stone such as tuff. It, in turn, was covered with a thin layer of dark hardened lava – basalt. Streams crossed the plateau in all directions, blurring it, and the cold and wind destroyed the tuff and the basalt rocks creating the bizarre shapes in the form of dinosaurs, lizards, camels, and mushrooms-morels.

If you look at the Cappadocian valleys from above shows the divided result of soil erosion, and at the bottom of these kilometer deep “ravines” full of vibrant life of Turkish villages.

Prayer of the underground city

The edge of the geological wonders known for thousands of cave churches of early Christianity. The monks were cut down in the rock churches and cells, decorated with frescoes, even tried to form a dome-shaped vault. In the modern Church, of course, it’s not very similar, but the scenery is still beautiful to walk in the unremarkable cave to the open air Museum of Goreme, and there are real works of art on the walls and ceiling.

Although these churches still

40 years ago were completely abandoned and even served as the dwelling place of Turkish bums, now they are restored and safeguarded. Strong experience from a mountainous area will complement a visit to the underground cities. We’re going to the biggest of them is Derinkuyu, an eight-story underground city of ten thousand inhabitants.

Derinkuyu – a dusty Turkish village, which once knew better days. In connection with the tourist boom caused by the discovery of underground cities, these times might come back.

Ticketing, security, steps down – and we are already on the top floor of the underground city. Narrow tunnel with a height of 160-170 cm is constantly having to go crouched. The smooth walls of grey-brown colour, rounded top, slight tilt of the floor. Right and left depart more spacious and now empty chamber. Breathing is surprisingly easy, the air is clean and cool, about ten degrees.

Quietly descend from floor to floor, pay attention to the vertical millstone, hidden in the niches on the right hand. These stones have been specially designed for closing of passages, if in the underground city suddenly imbued with enemies.

Vertical ventilation shafts go down to the groundwater wells serving at the same time. By the way, from these wells were taken water whole city up to the 1960-ies until the water supply system was built.

Reach the lowest point, which can be reached simple tourist. Actually, the city occupies a space of about four by four kilometres, and for access of onlookers, only 10% of its territory. We are on “minus the eighth floor”. Long spacious room with the altar is the Church. Without it, indeed, in any town in any way, even in the underground.

The country of beautiful horses

Build underground dwellings started the Hittites inhabiting Cappadocia from the XVIII-XII centuries BC. Later they were conquered by aggressive tribes, which, however, did not stay on this earth and went on, in the Armenian highlands. Exactly the Hittites 4 thousand years ago and invented the word Cappadocia – the land of beautiful horses.

Several centuries Cappadocia was ruled by the Persians, then conquered by Alexander the great. After the collapse of his Empire, the country briefly enjoyed its independence, and after 350 years, she became a Roman province.

From the earliest times through Cappadocia lay on the trade route from Europe to Asia Minor. And Christianity in this country of mountains and shaded canyons brought the Apostle Paul in the first century of our Millennium, and the first Bishop was St. Basil the Great here after long wanderings through Egypt and Palestine he found peace and tranquility.

Some time Cappadocia belonged to the Byzantines, then for a long time it was conquered by the Turks-Seljuks. At the end of the thirteenth century, the Ottomans were the last conquerors of Anatolia. The great Ottoman Empire lasted until 1918, and Cappadocia in the composition that slowly and inexorably transformed from an arena of turbulent historical events in a peaceful and quiet province.

Willy-nilly compare Ukrainian and Turkish province. The mayor of one of the towns (we would say “the district”) Urgup invites Ukrainian journalists for dinner. Center Urgup is just a couple of streets lined with shops and souvenir stalls. The main income brings tourism and wine production. In this small town has its own four star hotel, the mayor presents English discs about the city and excellently published materials, shows photos taken during a visit to Urgup Ecumenical Patriarch Bartholomew. The life of the ordinary provincial town pumps. Reprinted with the extension. Start at # 149)