The most beautiful Gothic cathedrals. 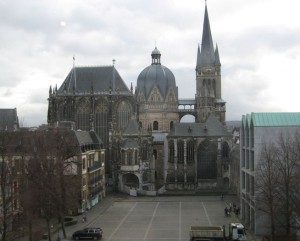 Aachen Cathedral – one of the Imperial cathedrals of Germany, which for centuries were crowned monarchs to reign.

He began his history of about 800 years, when king Charlemagne ordered the start of construction. In those days Germany consisted of many small principalities of different incomes. The money for this grandiose construction was found only in the Empire of Charles. It is no wonder that there was a rumor that the devil himself gave her money for such a Grand construction. And that the devil demanded his victim the first person to come to the Cathedral. Then the wily citizens let the first wolf. Damn greed rushed at him, and only then saw the switch.

In the year 805 by Pope Leo the Third consecrated the Cathedral. And in the year 814 Charlemagne found his refuge in the crypt of the Cathedral. But that was only the beginning. Then over the centuries the body of the monarch was transferred to various parts of the Cathedral. First this mess started Otto the Third. In one of the monastery’s chronicle was told that Carla allegedly found sitting on a white throne, with well-preserved body and with the Royal mantle. The throne he seized, filled with gold and a few centuries later the Emperor was sitting on it. Now he stands at the Cathedral as a historical relic. Now, Otto transferred the remains of its predecessor in a rich coffin. Then, another Emperor, Frederick the First, in 1215 again to disturb Karl and moved the remains to a more beautiful coffin. And until the 17th century did not touch him. In the mentioned century, when they again moved, this time in the sacristy, where they rest and still.

Each Emperor tried to make a contribution into the Cathedral. This mosaics and ornate lamps and much like. A sacristy was added to the various shrines brought from the East.

However, in the 19th century, the Cathedral was in poor condition. Apparently it was forgotten. founded in 1849, “Society of Charles the Great” (“Karlsverein”) set themselves the task to restore the Cathedral both inside and from the outside; it is already significantly failed due to the strong financial support of king Friedrich Wilhelm IV and Wilhelm I. fourteen of the statues inside the choir raised up again in all its former splendour paints. The restoration of the mosaic was completed in 1881. At the entrance to the choir, where once stood the altar before which in the time between Louis the Pious (813 year) and Ferdinand I (1531) were anointed 35 German kings and 14 Queens, November 18, 1873, was consecrated the new altar.

Aachen Cathedral was one of the first UNESCO world heritage site (in 1978).