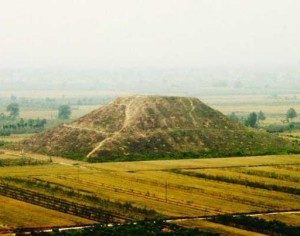 Now Luhansk archaeologists say they’ve uncovered two pyramids and the sanctuary of the pagan God of the Sun. It has nothing to do with the Egyptian RA. The Ukrainians, as they claim, has its own ancient faith — Rovira, and the pyramid — temples of its adherents.

Lugansk residents say that their pyramids five thousand years. They are older than the Egyptian, but were never tombs.Business Ukrainian soul cannot bear the uneconomic use of large angular houses. In them, according to doctor of historical Sciences Victor Klochko, prayed and was treated. “This demonstrates a highly developed and ancient Ukrainian civilization.”

Luhansk authorities say Russian and Ukrainian nationalism not suffer. But they calculated the financial benefit which the promise of the pyramid. The head of the Department of tourism and protection of cultural heritage of the Luhansk regional administration Vladimir Vyborny said that the pyramids are “rusifitsirovanny”. Tourists will be able not only to look at them, but to listen to their songs. This, according to regional chief, will attract to the region, remote from tourist routes and glorious only by the steppe and by heaps of foreigners with long Euro.

Now prehistoric discovery looks like this: two huge stones around them — ditch. Local officials hope that if the ditch needs to be deeper and dig a few decades, you can Goritsa to the base of the pyramids. With the excavations in Lugansk not in a hurry — remember the Sevastopol experience.

After the discovery of the pyramids near the city of Lugansk in Ukraine, a new subspecies scientists — pyramidology. They were United around of the International Academy of safe development of mankind. Her representative Hofmann says: all in Ukraine, 200 of the pyramids, and soon they find near Dnipropetrovsk and Chernivtsi, 12-15 thousand years.

In addition, in the Ukrainian villages began to build new pyramids for a trendy treatment. The scheme of improvement in them is this: if a drunk combiner for 10 minutes place in a pyramid, he is not only sober, but also come to their senses, will become a full-fledged Ukrainian citizens. They say that this method is used by Zaporizhian Cossacks. Berdyshev it formulates scientific words: “it Can be argued that the energy of the pyramid harmonises the environment and is energomodule, restoring the balance of subtle field structures of man.”