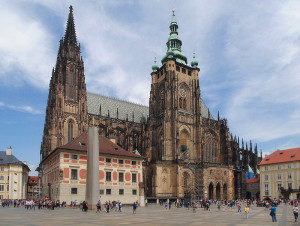 Mathieu of Arras was destined to work on the construction of the Cathedral for eight years. He died in 1352. Then Charles IV was forced to seek a new architect, and he found him in the person of a young native Austrian city of Gmunden Peter Parler, who at the time of arrival to Prague was only 23 years old. He eagerly went to work and continued the work of Mathieu of Arras. Parler was acentuantes and wasn’t afraid to experiment, and therefore made in the architecture of many new elements. For example, thanks to him, for the first time in the conditions of Central Europe appears net a set, which he sold just in the main Central nave of St. Vitus Cathedral.

Here I would like to mention that this is a very unique phenomenon, because in the middle Ages the architect was at the level of the ordinary artisan, and is not erected on a pedestal of society. And the fact that Charles IV decided to put them on your level – on the level of the Emperor of the Holy Roman Empire, only confirms that he deeply respected their work and appreciated their skill. Well, let’s continue our journey and note that we are now in the Third yard is not only in front of the Cathedral of St. Vitus, but also a remarkable sculpture depicting St. George, which in the Czech Republic called Jiri. This statue is also directly applies not only to the personality of Karel IV, but to the architecture of the time.

This sculpture is a work of two brothers jiří and Martin from Klausenberg is a small town, which is located today on the territory of Romania called Cluj-Napoca, but then he belonged to the Czech state, and these two artists were invited to create the sculpture. The statue of St. George is a fountain, and in the warm months at the mouth of the serpent, which spearing George, flowing stream of water.