The most mysterious places in the world 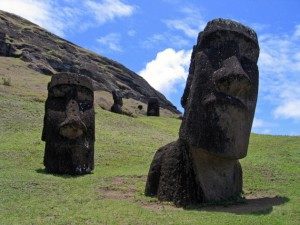 The world is full of fascinating and mysterious places. Today for you we have selected ten of the most mysterious places, which left us as an inheritance from our ancestors (or maybe aliens?). Look at these images and descriptions, possibly, everyone can make his conclusion from these stories.

More than 400 statues, like a clock, standing on the remote Easter island, and their presence adds to our lives a lot of mystery. There are many possible theories about their purpose: religious function (in order to curry favor with the gods as a result of exhaustion of the resources of the island), a symbol of protection, a place of worship. The mystery remains and probably will forever remain!

Discovered in 1911, this abandoned city is located at an altitude of 2400 meters above sea level. It is situated between the Andes and the Amazon, and is a world heritage site. Machu pichu became the real treasure of Peru, it includes a fortress and temple devoted to the worship of the sun. The mystery of the ancient city far from being resolved and continues to fascinate experts, causing delight and curiosity.

Located on the Yucatan Peninsula, Chichen Itza is the most interesting of all the ruins of the Mayan tribes.Among the many buildings the most interesting is the pyramid called “El Castillo”, which only during the spring and autumn equinoxes there is a silhouette of the God Quetzalcoatl (also called the feathered Serpent).

Known for its turbulent waters, where already sunk numerous ships and aircraft, the Bermuda triangle is a stretch of sea area of approximately 1100000 km2, which forms a triangle between Miami, Puerto Rico and Bermuda. Still do not know exactly the cause of this mysterious disappearance. Blame the foreigners, the aliens, the space-time distortions, magnetic field, or something supernatural? Despite numerous studies and huge number of dives, the tragedy in the Bermuda triangle remain unexplained.

Iconic figures of Egyptian civilization – the three pyramids of Giza contain many secrets. The pyramid of Cheops, the largest of the three, for thousands of years shrouded in mystery . Actually, it took 4500 years to build this structure. The pyramid is the tomb of Pharaoh who had the same name. Perhaps for his life Pharaoh deserved too many curses, so his ashes can not rest even after the Millennium.

Its name means “suspended stones”. It is a mystical place in the South of England is formed by a circular fence made of colored stones, they are almost all blue. The stone separates from the rest of the space, a small moat. Previously it was thought that this is the work of Satan, but it is now recognized that the construction is the result of human labor. However, its purpose (most likely, a religious ritual) is still unclear.

Incredible geometric shapes carved on the ground, on the surface of the Nazca lines, called geoglyphs of Nazca, spread out over 450 square km. it is believed that they appeared between 500 BC and 500 ad, the Numbers are formed in the image of the monkey, whale, bird, tree.

The size of the largest of these structures is 200 meters in diameter. Because of such a considerable size, to see the images from the surface of the Earth was impossible. And although they have survived since antiquity, found their only in modern times, when people are able to rise into the sky and fly above the Ground. This was a surprising discovery in the first half of the twentieth century. To date, the origin of these recordings remain a mystery.

The same kind of drawings like the Nazca lines, could see the English. Mysterious circles on the fields in the counties of Hampshire and Wiltshire, appeared in the late 1970-ies. What is this, military intervention, vortices or something supernatural? Although it has been proven that some crop circles are fake, while others still remain a mystery.

Located in Sichuan province, this bamboo forest is a place worthy of a science fiction movie. Just as the Bermuda triangle, a forest beyond time, always remains a terrible secret. Framed by a deep gorge that is regularly shrouded in thick fog, the terrible valley of death keeps its secrets for a long time, because it seems that no one gets out alive from there for many years. Body dared to enter the hollow Haiju were not found. Haiju translates as “Dark bamboo thicket”.

To find out their fate may not be anyone. The leaves can tell the fate of about 40% of people on Earth. To read the information can only Nadi readers.